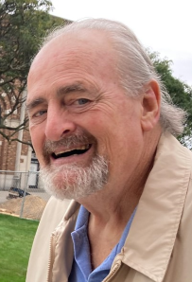 As the youngest of seven, Stephen was loved by many, and that love continued throughout his life.

Stephen graduated from Grand Rapids Catholic Central High School in 1972. He excelled at football and wrestling, becoming All City in Football and City Heavy Weight Champion in Wrestling. Stephen also was a lover of poetry and a great dancer.

After High School Stephen attended 2 years of college at Grand Rapids Junior College and then, a partial year at Northern Michigan University continuing his love of Football on a scholarship.

In 1974 Stephen moved to California. Once in California he worked as a Shipyard Welder, High-Rise Construction Worker, Stucco Mixer/Carrier, where he earned the nickname “Hercules” due to his strength and long hair.

Stephen met LeeAnn Timberman in California and had two children together, Daniel and Christopher. Married 1978-1983.

In 1994 Stephen settled into a career as a Custodian for the Cajon Valley Union School District where he retired after 27 years. During his time with the School District, Stephen was able to be a positive influence for hundreds of people.

On May 22, 2006, Stephen married the love of his life, Alvena Markussen, and continued a love that all could see as genuine and strong.

To send flowers to the family or plant a tree in memory of Stephen Hillary, please visit Tribute Store
Saturday
18
February

Share Your Memory of
Stephen
Upload Your Memory View All Memories
Be the first to upload a memory!
Share A Memory
Send Flowers
Plant a Tree