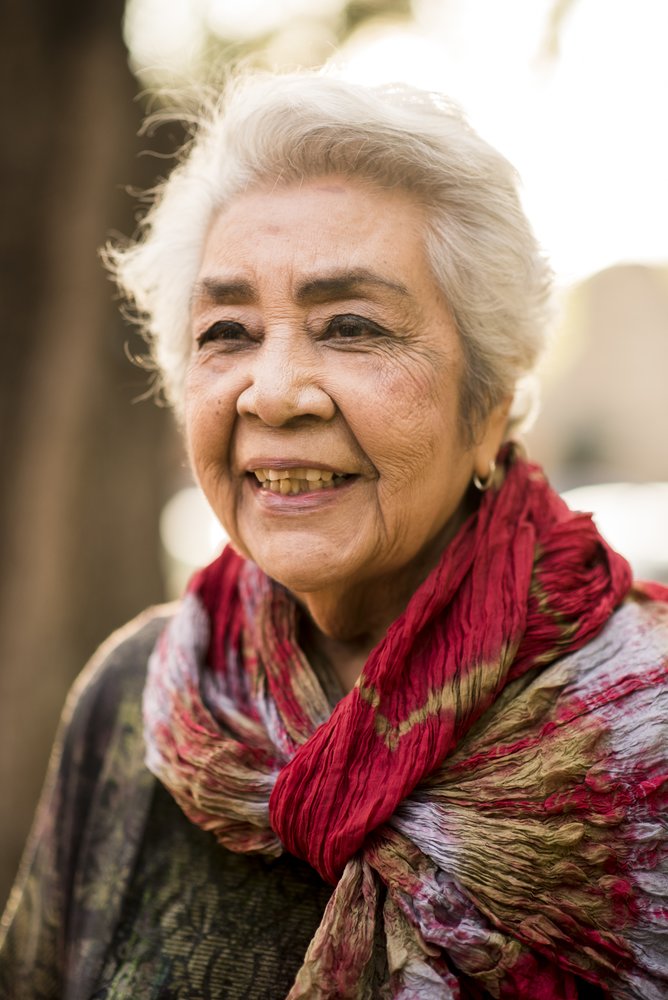 Jenny passed peacefully in her sleep at home after 92 full years of life.  Jenny, was born Juanita Rodriguez Gonzales in the late 1920s, in El Centro CA to Amparo Rodriguez and Juan Gonzales.  Her father was born in Julian CA to Juan Gonzales and Angelita Sortillon Dominguez, and whose father’s family was living in the area during the gold mining rush in that area in the late 1800s when he was born, and his father (her grandfather) perhaps associated to one of the indigenous tribes in that area and  Yuma Arizona.   Her mother Amparo immigrated to the U.S. in the early 1920s from Culiacan/Sonora Mexico with her only son Jose Hernandez, two brothers, a sister, Elvira and their cousin Francis.

Jenny enjoyed a liberated upbringing, with older parents, her mother 36 when she was born and her father in his mid-40s, her parents second marriages. She recalled that by then they embraced more relaxed parenting skills, and spent their time doting on their daughter.  Her father taught her how to shoot and hunt, which he did to provide quail, ducks, doves, rabbits, pheasant to put food on their table during the Great Depression years from 1929 to 1941.  She had three half-brothers from her father’s previous marriage, Pasqual and Frank Gonzales and a third whose name eludes us.  She also had a half- brother, Jose Hernandez, from her mother’s previous marriage and eight nieces and nephews from her half-brother’s marriage. She considered herself spoiled by her parents, she liked to share the stories of her mother encouraging her to take her studies seriously but also her fun. Like her mother, she was smart and clever, with a loving personality.  She had a good amount of freedom to jump in the car and trek to San Diego with her high school friends for mountain outings, and beach jaunts as a teenager.

She hung out as a teen with a close-knit group of her Imperial Valley local teens, including the Gomez sisters, whose family owned a dairy business in the Imperial Valley.  Her closest high school friends included Emilie Gomez Alarcon, Bea Gomez Arce, and Louise Momita Kaneshiro and Clara Parra all graduates of Central Union High in El Centro. Emilie and Louise survive the friendship and are currently in their 90s.. Loving friends for her entire life.

Jenny was married to Antonio T. De Necochea, son of Gabriel De Necochea and Concepcion Talamantes, until his passing in 2014, and they had four children together. As young marrieds, they also took in two of Antonio’s younger siblings, (a brother Armando and younger sister Connie) when their parents passed in the early 1950s; taking responsibility for his two teen aged siblings, when Jenny and her husband were in their mid-twenties, and already young parents to two of their own children.

Her first job was as a clerk in the local J C Penney store in El Centro in the late ‘40s.   Then, after graduating from high school, she began working in an office for a local agricultural soil testing and geo- engineering firm John D. Hess Engineering.  She was curious and intelligent, and a great problem solver and eventually was also assisting in the lab, doing soil test assays, in addition to her bookkeeping and clerical skills.  Relocating from the Imperial Valley to San Diego County in the 60s introduced her to her career field in Procurement and Warehousing logistics.  Jenny had a very successful career and myriad promotions in the field of Purchasing and Warehousing beginning as a clerk with the La Mesa/Spring Valley Unified School District, to her steady rise in varied more responsible assignments with Newport/Mesa School District in Orange County, Saddleback College in Orange County, Goleta Unified School District in Santa Barbara County, and at the time of her retirement in 1991, the Grossmont / Cuyamaca Junior College District, San Diego as the Director and Head of their Purchasing and Warehousing departments.

She was a phenomenal memorizer of phone numbers, and detail, organized and a precise multitasker. She wrote in an incredible cursive hand, and her style of writing was inspirational, wise and always used to communicate her love.  A skilled culinary and baking wiz, who interestingly did not know how to cook when she married, now is remembered by her most cherished dishes, pies and cakes.   An avid reader until Alzheimer’s and her eyesight kept her from that.   She was known for her love of knitting and crocheting, producing beautiful works of art in Afghans, dresses, tops and even a ‘hot pants’ crocheted set. Later she would find a love for cross-stitch embroidery; and then graduated to counted cross-stitch the higher level of precision for this art craft. She produced some beautiful heirloom pieces now cherished by her grandchildren and great grandchildren. Her biggest life challenge…living the last  twelve years with Alzheimer’s, and the last three with failing eyesight.  Her family has been amazed at her beautiful spirit, demeanor and graceful acceptance of each milestone, and gradual losses of the details and skills of a lifetime.  We honor her for her ability to laugh, love, show her affection, and live each day sharing her gratitude…even for the basic joy she could express at delight of an ice cream cone. Our unspoken promise to her, that we would do all that was possible to have her with us at home, to  her last day.   And fete accomplished, with all our gratitude we were able to do that with her and for  her. She passed gently, and peacefully at home.

Private family services will be held.

To send flowers to the family or plant a tree in memory of Jenny De Necochea, please visit Tribute Store

Share Your Memory of
Jenny
Upload Your Memory View All Memories
Be the first to upload a memory!
Share A Memory
Send Flowers
Plant a Tree