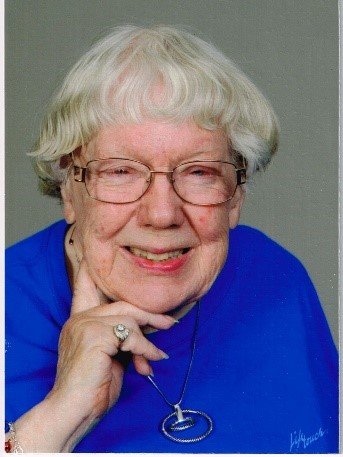 Nancy Frazer Young passed away peacefully in her sleep on Monday May 6th, 2019, age 86.  She was born on March 29th 1933, the daughter of Arline and Edgar King Smith.  Her father was the City Engineer of Milwaukee, Wisconsin. In 1935 Edgar unexpectedly died, leaving Arline to raise Nancy and her about to be born sister Susan during the Great Depression.  The family moved many times, Nancy attended no less than eight grade schools and two high schools.  In college Nancy majored in English Literature, graduating from Beloit College in Wisconsin in 1954.  At Beloit she met Robert C. Young; they were married in 1954, and moved to Alliance, Ohio, where he took a job at the Babcock & Wilcox Research Center.

In Alliance the couple had two children that survived infancy: Robert Miles (now resident in Ellicott City, MD) and Patricia Susan (now in San Diego, CA).  As their children grew older Nancy took part-time employment at the local college, Mt. Union, in the college’s admission department.  In 1977 the family moved to Long Beach, CA, where Robert C. had found employment.  Later, upon his taking a job at the Lockheed Martin Research Center the family moved to Valencia, CA.  This being the 1970s, to find useful work, Nancy hid the fact that she had graduated from college, instead stating on applications, as many women did in her generation, that she had only attended college.  After several years as a secretary at a fastener company, she found employment as the office manager and administrative assistant to the CEO of Arc Machines, Inc., a maker of automatic tube welding machines located in Pacoima, CA, a position that she found great satisfaction in until her retirement in 2003.

Robert C. passed away in 1999.  Following her retirement, Nancy moved to the San Diego area to be near her daughter Patti, son-in-law K. Alan Kneale, and grand-daughter Caitlin.  Nancy would take trips, especially at Christmas time, to Maryland to visit her son and daughter-in-law Barbara and grand-children Miles and Lauren.   Nancy loved to decorate for every holiday.  She loved Christmas because there was lots of food and presents, but she loved Thanksgiving even more because there was lots of food but no presents to deal with!  Remembering her own upbringing by her widowed mother during the Great Depression, she always made sure that her Patti & Bobby had many presents to open at birthdays and Christmas.

She loved to travel, locally and occasionally afar. After traveling to London, England, her return flight made a connection in Amsterdam, but midway across the Atlantic the pilot was ordered back to Holland, it being Sept.11th, 2001 and all air traffic to and inside the US was grounded.  With many other stranded passengers, Nancy spent several days in a Dutch refugee center; she has always stated her gratitude to the Dutch who treated her so nicely.

Nancy always said that she hated cooking, and greatly enjoyed her opportunities to dine out with her friends and discuss the menu.  She loved to read cookbooks, and to read mystery novels, and especially historical fiction, particularly those set in the Regency period.

To send flowers to the family or plant a tree in memory of Nancy Young, please visit Tribute Store

Share Your Memory of
Nancy
Upload Your Memory View All Memories
Be the first to upload a memory!
Share A Memory
Send Flowers