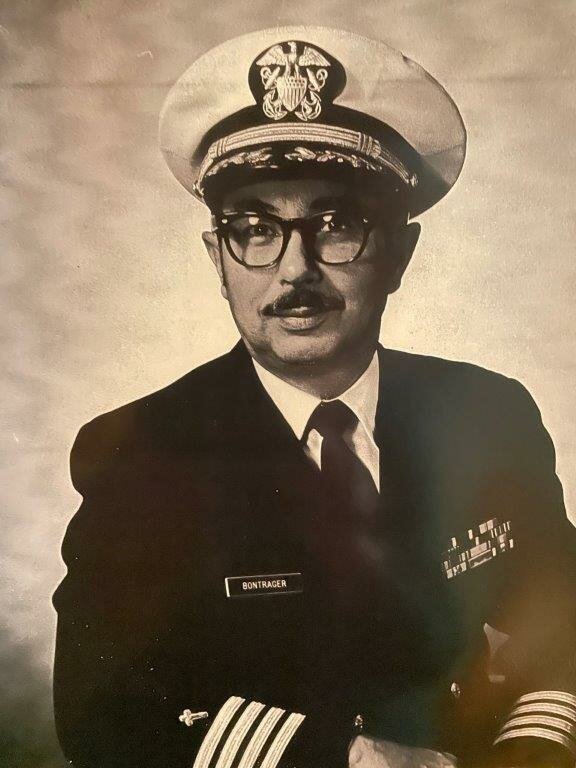 John Kenneth Bontrager was born 2-15-23 at West Lafayette, Ohio, the son of Charles and Marguerite Bontrager. In 1943 he married Vestal McConnell Bontrager while a member of the official U. S. Coast Guard Band, Coast Guard Academy, New London, CT where he served over three years. Upon discharge from military service he graduated from Heidelberg University and the Graduate School of Theology at Oberlin College. In 1952 he was ordained at St. John Evangelical Church, Coshocton, Ohio and served a pastorate at the Millersburg Glenmont Ohio charge. In 1955 he entered the U. S. Navy Chaplain Corps and served for twenty years active duty, retiring in 1975 with rank of Captain, U. S. Navy. He served overseas with the Marine Corps, Navy Seabees, and nine ships. John also holds a Master of Divinity degree from Vanderbilt University Divinity School and a Doctorate in Theology from the Claremont School of Theology.

After retirement in 1975 John was Pastor of Paradise Hills United Church of Christ for 10 years and Minister of Visitation at Mission Hills UCC, San Diego for five years.

In 2007 he was received as Pastor Emeritus in the Lutheran Church Missouri Synod. Ordained in 1952 he recently celebrated 70 years of ordained Christian ministry.

Graveside services will be held Monday, November 7th at 10:15 am at Miramar National Cemetery. In lieu of flowers, donations may be made to Hospice at website www.comfortandpeacehospice.com.

To send flowers to the family or plant a tree in memory of John Bontrager, please visit Tribute Store

Share Your Memory of
John
Upload Your Memory View All Memories
Be the first to upload a memory!
Share A Memory
Send Flowers
Plant a Tree