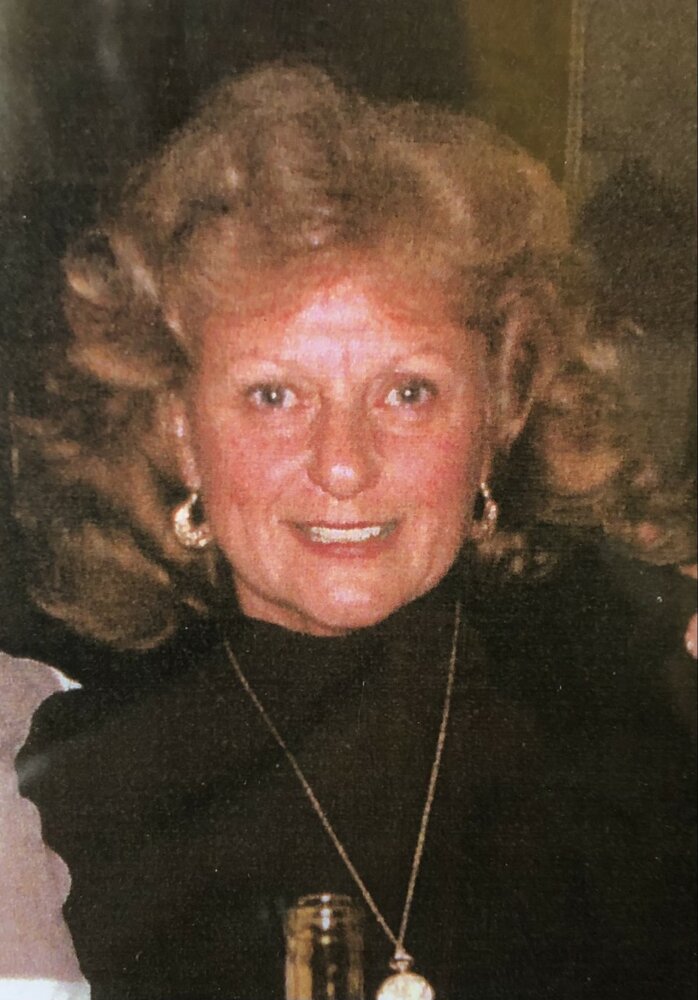 We often see the end of life as a loss. Something gone, something missing.  But in the case of Bernice “Tootie” Farmer-Maller, it’s easier to see how much fuller and richer the world is because she was in this physical world for 95 years.  Bernice was a creator.  She used her hands to paint, her arms to squeeze the accordion, her voice to sing arias, her legs to play doubles tennis with her husband Leo.  This obituary should be as unconventional as she was and it starts with a modest beginning in a small town in New Jersey.  In Milltown on December 14, 1926, Bernice was born to Ida May Wolf Farmer and Silas Wetherol Farmer.  Bernice, a self-described tomboy, was a bit of a risk-taker.  She came home to rather serious parents with scraped knees from riding her blue Excelsior bicycle all over town.  She also spoke with great love and affection for her younger and only brother George, who was as much a friend as a sibling.

Restless, but practical, she turned down a quiet, predictable life (along with a couple of marriage proposals) to marry a charismatic and handsome man who swept her away from her job at the Daily Home News Publishing Company in New Brunswick.  Leo, would sit on the edge of a desk and watch Bernice as she diligently prepared her work for the classified section.  Bernice saw that a life with Leo promised adventure, as he had been a radio announcer in West Virginia and Mexico.  Bernice and Leo were married in 1948.  They moved to Queens, New York.  Bernice often joked that she “hated New York” and then ended up living there for 30 years.

In 1950, their first child, Denice, “Cookie”, was born. Bernice called all little girls “Cookie” and the affectionate nickname has stuck.  Bernice once described Cookie as her “first miracle”. Candice “Candy” came two short years later in 1952. Patrice was born in 1957. Hard to imagine where Bernice found the space or time to place the sewing machine and create matching outfits, knit beautifully designed sweaters, and prepare delicious meals on a shoestring budget. Life was full of domestic chores and obligations.

They soon outgrew the cramped two-bedroom apartment in Queens and moved to the verdant suburbs of Long Island in 1964. A larger home offered the space for more children, and Douglas was born in 1966.  After 12 years on Long Island, the adventure continued as some of the family moved across the country to San Diego and eventually settled In a beautiful house overlooking a canyon. A new chapter began.

With grown children of her own, Bernice worked as a teacher’s assistant at Jerabek Elementary School for over 20 years and derived great satisfaction from this work.  In her spare time, she studied meditation at the Unitarian Universalist Church in Hillcrest.  The UU’s are self-described as “unified by a desire to make a difference for the good.  We have a track record of standing on the side of love, justice, and peace.”  Indeed, when she pulled up to the church in her red Prius each Sunday, you could see that Bernice valued love and diverse thinking.  Leo and Bernice continued doubles tennis and she commented that they were “the only couple at the club that could play together.”  Their marriage was an uncommon bond that endured for 65 years.

The children built their own lives as Cookie moved to Seattle with her husband Jim Petersen. Their children Matt (Vanessa, wife, and son Nate) settled in Seattle, and Jenna (Hubin Palan, husband, and sons Hubert and Nicholas) reside in Oakland. Candy and (late husband Barry Sherman), put down roots in Athens, GA, had two children, Eric now living in San Francisco and Jessica (husband Guy Tawney) and their son, Barry, settled in Baltimore, MD. Patrice found her own life in San Diego and has a loving son in Max Maller. Doug (wife Staci Rosen) and their son Jake round out the family in New York.  Bernice’s influence spans the country and her legacy is vast.

As in most lives well lived, there were significant losses.  Two major ones are the loss of their home in the great Cedar fire of 2003 and the eventual decline of her husband Leo’s health.  With all of their material possessions destroyed, the family and community came together to rebuild. Bernice was a survivor, showing great resilience and fortitude and the strength to transform again.  This time into a caretaker for seven years when Leo suffered a stroke.  After his death, Bernice found herself alone and searched for her “voice.” Painting became a “friend” as she called it, so she could never be lonely, though the family scattered.

Her paintings are an extension of her and they will keep her alive for the family.  They are not just things, but pieces of her. You can see the world through her eyes, if only for a moment.   There are family portraits in watercolor and edgy New York subway scenes in acrylic.  In her painting, she found her voice and for her efforts, she won awards and shared the unique gifts of her work with many.

In the last chapter of her life, Bernice still made an impact on those around her.  A colossal personal trainer at 24 Hour Fitness posed with her for a photo while she flexed a powerful bicep in her nineties.  And while yes, she eventually played Bingo and utilized a wheelchair, she might fit the vision of a typical nonagenarian, her mind remained intact, so she could provide the wisdom of an elder through her stories.

At the very end of her 95 years, she felt at peace.  Her life had been an adventure.  There was nothing left unsaid.  She knew that her family would be ok.   And she passed away in comfort and peace, on her own terms on March 14, 2022.

And to quote another creative and admired woman: “My mission in life is not merely to survive, but to thrive; and to do so with some passion, some compassion, some humor, and some style.” - Maya Angelou

A celebration of her life will be held at a future date for family and close friends.

To send flowers to the family or plant a tree in memory of Bernice Maller, please visit Tribute Store

Share Your Memory of
Bernice
Upload Your Memory View All Memories
Be the first to upload a memory!
Share A Memory
Send Flowers
Plant a Tree