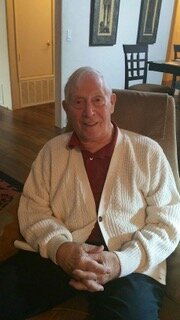 Harold Austin Denny was born in Champaign, IL on March 3, 1930, to James and Julia Denny. Shortly after Harold’s birth, James left the family, causing the family to move back into Julia’s family home. Due to financial constraints, Harold was placed into an orphanage when he was six months old. About six months later, Harold was placed in foster care with family friends. When Harold was about 7 or 8 years old, his foster parents divorced and he moved back into the orphanage.

On his 11th birthday, Harold was given a bag of sandwiches and a train ticket from Chicago to San Francisco, CA. His mother and her new husband Virgil R. Davis met him at the train station and he became Harold Davis. From that point on until 1949, Harold lived in Calistoga, CA, where he attended school, played on the high school football team, and became active in 4-H. After high school, Harold joined the Navy and was in communications on the USS Iowa during the Korean war. After leaving the Navy he remained in San Diego and found a job in the local branch of the Bank of America selling car registrations for the DMV. It was there that Harold met the love of his life, Lois Pike.

Harold and Lois were married on July 30, 1955. In 1956 they welcomed their first child, Daniel Alan; then in 1958, Diane Marie was born, followed two years later in 1960 by Lisa Ann. Since then, the family has grown with one grandson, Taylor Ryan White, and two granddaughters, Hannah Victoria Kukuk, and Twyla Grace Kukuk.

Harold worked up until his mid 80’s. Foremost, he was a firefighter and worked for the city of San Diego until his knee was injured on the job. Upon retiring from the Fire Department, he was a tour guide for Greyline Tours and worked as a travel agent. Harold also drove a limousine and had the unique opportunity of transporting many celebrities around town: The rock band Kiss, Alice Cooper, Sly, and the Family Stone, Elvis Presley, and his favorite – Bob Hope.

Harold was devoted to his family. He would go out of his way to support his three children in their various activities: cub scouts, boy scouts, music parents, and campfire leaders, to name just a few. He also loved taking the family on vacations, especially in the family camper. Their travels took them across the United States, visiting various relatives and historical sites along the way. Many summers were spent with close relatives – the Hendersons – at lakes in central California camping and water skiing.

Harold was active at his local church, Foothills United Methodist, where he was head of the Trustees, a communion steward, part of Disciples Bible Study, and a member of the visitation team.

Harold was also a member of the Masonic Temple where he was a master mason. Where he was a member for over 50 years. Recently he also joined the Scottish Rite, an extension of the Masons. It was there that he got passionate about the children’s language learning lab.

Just recently, Harold commented on his life being longer than he could have ever imagined and was filled with many adventures. He will be missed by his family and many friends.

To send flowers to the family or plant a tree in memory of Harold Davis, please visit Tribute Store

Share Your Memory of
Harold
Upload Your Memory View All Memories
Be the first to upload a memory!
Share A Memory
Send Flowers
Plant a Tree