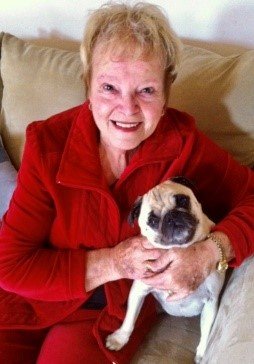 Sue was an employee of Wisconsin Bell, in Fond du Lac, Wi in the Engineering Department.  During that time, she joined Big Sisters of Fond du Lac Country and about a year later became a member of their Board.  She helped organize the first meeting of the “national” organization – Big Sisters International in Fond du Lac. bringing visitors from all over the US and Canada.

In 1974, she applied for a transfer from Wisconsin Bell to Pacific Bell; and moved to San Diego.  The transfer did not come through immediately, so she worked in the Engineering Department of a small telecommunications company for about 6 months when her transfer to Pac Bell came through.

She then served as an Instructor in Pac Bell’s Professional Development organization.  In that role, she traveled throughout Southern California training management employees of various titles in the Marketing and Sales organizations.

She spent several years as a Manager of the instructor team of which she had been a part, again throughout Southern California.

In each capacity, “Sue B.” was outstanding in her role, effectively training and then leading others.  She was universally admired and respected for her skills and her performance by her students, her peers, and her leaders.

Most notable perhaps, is that “Sue B.” was truly loved by those she knew and worked with.  She always brought not only excellent personal and professional skills, but her consistently positive, can-do attitude, and her wonderful sense of humor to the organization.

Everyone was happy for Sue B when she retired, but sad that the organization was losing such a wonderful person.

While loving work Sue was also incredibly involved in the San Diego Community.

She joined the Board of Great Oaks Village, which was a 15-bed residence for developmentally delayed young adults.  She loved involvement with the residents.

Then Sue became a part of the Generation to Generation program of the San Diego Office of the Juvenile Probation Department.  It involved writing letters and understanding these, incarcerated 16-18-year-old boys, in juvenile detention camp,  while sharing her own stories and connecting with them.

She then volunteered with the San Diego Alzheimer’s Association where she wrote programs (ABC – Alzheimer’s Beginning to Cope) still being presented in 2020 and then was involved with their fundraising walk.

To assist a dear friend, she also wrote a program for the San Diego Parkinson’s Association entitled:  Good Start – which is still being presented in 2020.

Volunteering deeply at the San Diego Arthritis Foundations Sue again was a long-time member of their special events committee for the Arthritis Walk and her favorite the Jingle Bell Run/Walk for Arthritis.  Being a part of what she called the “best darn committee in the land” and lovingly called the “The Ducks” for always following each other.

Sue was also continually active in her church with family groups, Samaritan purses and gifts for children in underserved countries.

Sue will be missed by many.

To send flowers to the family or plant a tree in memory of Susan Bearder, please visit Tribute Store

Share Your Memory of
Susan
Upload Your Memory View All Memories
Be the first to upload a memory!
Share A Memory
Send Flowers
Plant a Tree