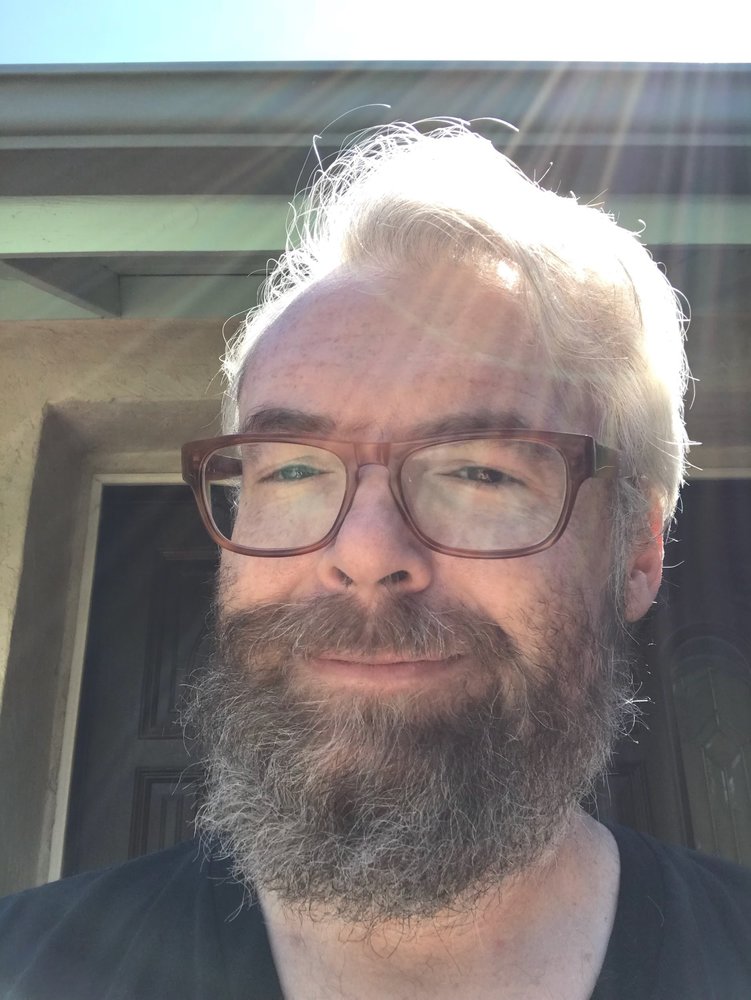 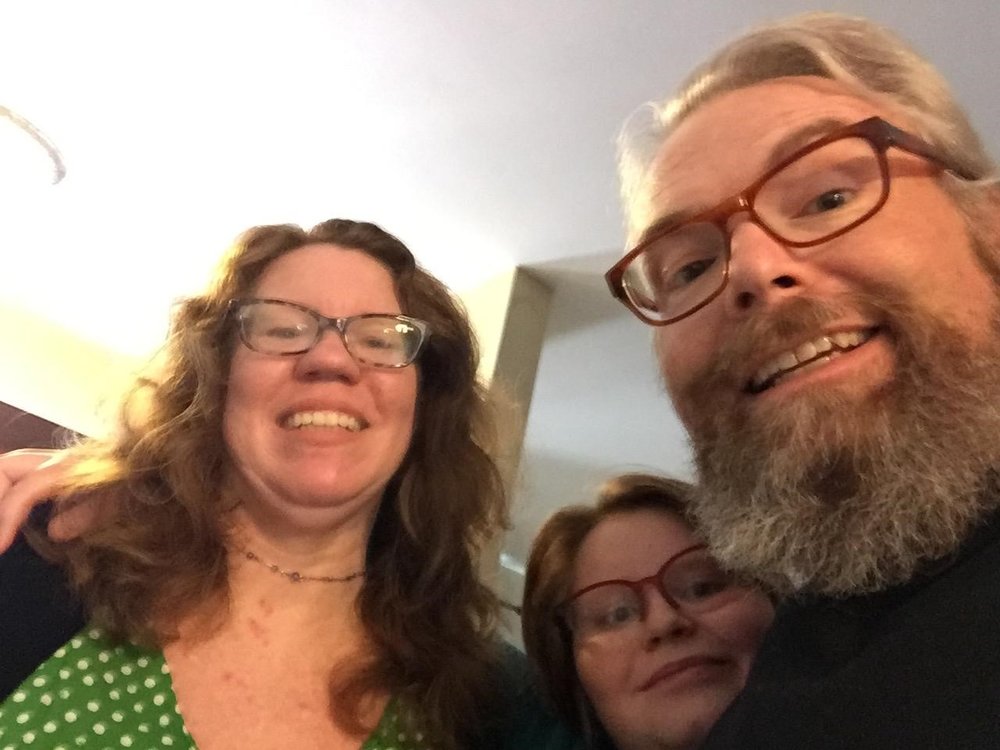 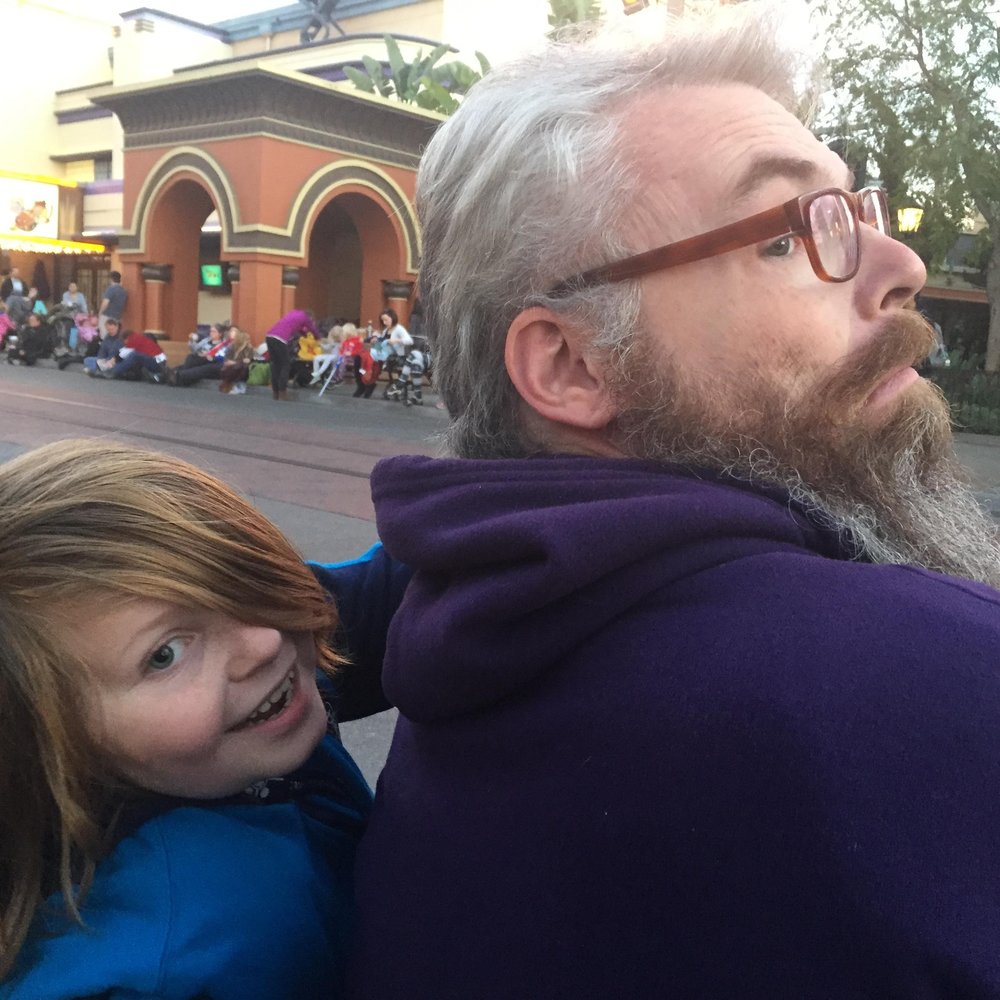 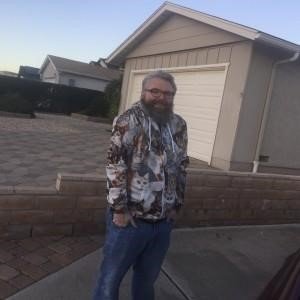 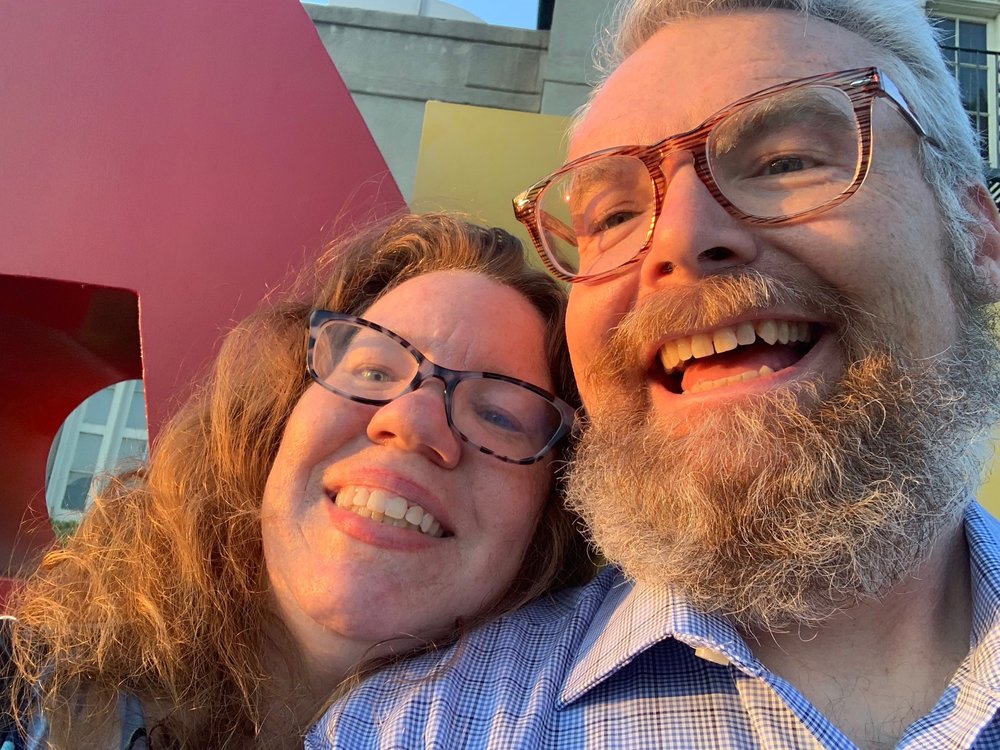 Andrew “Bear” Peck— beloved husband, father, friend, artist, mentor, wit, and storyteller passed away on January 22, 2020, in San Diego, holding the hand of his wife after his closest family and friends had gathered to honor him. Andy was 46 and lived in love and light despite the devastating effects of an autoimmune disease, Vasculitis, for nearly 5 years on his body. He lived just long enough to see his son, Franklin, turn 13.

Born on October 1st, 1973 in Riverside, California, Andy was the only son of Sara and Robert Peck. Andy came from generations of artists, engineers, inventors, and creatives-- his mother, a painter and an art teacher, his father, a metal sculptor, his paternal grandfather, an inventor and  farmer, his maternal grandfather, an architect,  his cousin, an illustrator and teacher, his aunt, a potter and museum curator and his other aunt, an art collector and art seller. He married a poet.

Andy was raised in the Canyon Crest area of Riverside in a home his mother and father loving made into a work of art with citrus trees, liquid ambers, and bougainvillea in the courtyard. Andy lost his father when he was only five but  the house remained a quiet sanctuary of  modern furniture and ever rotating collections of art of all kinds as testament to the love and partnership of his parents. He was an Alcott Elementary Alley Cat,  a Gage Middle School Gator and a Poly High School Bear (Class of 1991) -- though he never cared for school much, he loved learning and creating.

Andy claimed he spent 10 years in Art School. He went to Cal Baptist where he met musicians, Riverside Community College where he studied electronic music, philosophy and worked on the Literary Magazine, Muse, reading and writing poetry and acting as art director for several years. He met his wife, Cali, while co hosting poetry readings.  He moved to Los Angeles and earned his certification in Sound Engineering. His move to  San Diego so that Cali could pursue a MFA in Poetry saw his return college at Grossmont College where he studied Graphic Design. In 2006, Andy  earned  his Bachelor’s degree from San Diego State University in Applied Arts with an emphasis in Ceramics.

Andy was a versatile artist and though he held many jobs (and even liked a few of them), the center of his life was art, storytelling, mentoring, and humor no matter what gig he might have at any given time.  He would simply change his medium. From his early teens up until his death, he was a RC car body painter, Zine and Manifesto Writer, Poet, Cartoonist, Illustrator, Graphic Designer, Wood Worker, Potter, Fabric Artist, Instilationist,  Print Maker, Photographer, Electronic Musician, and Digital Painter. His goal this year was to become a certified Bob Ross Painting Teacher and a little before that he was thinking about taking voice acting workshops. When he was able, he was finishing the drawings of the second in the Amazing J series of children's books and returning to his Midi musician roots by creating eletronica on his multiple computers. He was always cartooning which he called doodling.

He designed the cover of his wife’s book Lantern Tree, CD covers and promotional posters; he built tables, sketched comics, applied his talents to video and photography,  and created stunning batiks, pottery and children's picture books.

Andy’s first job was at Target. He hated retail work as he was a person person and not a people person. He did a lot of  jobs over the years  but usually for no longer than a year if they weren’t somehow related to his passions like at Guitar Center, Greenpeace (for a day) Staples, and even in the mailing room of SDG&E. He worked for Kinko’s for a decade in the Westwood store and then again San Diego as a Graphic Designer and Computer Guru. In the mid 1990’s, after temping as a game tester and working on Mech Warrior, he was offered a full time position at Activision but declined to move from LA to San Diego with his wife. He freelanced as a graphic designer and started a T Shirt making business at different points in his life.  He would work in the video game industry years later at Sony Online as a Game Master for Star Wars Galaxies, a Massive  Multiplayer Online Game, where he was an in- game cop, creator of live events, and trainer for the Indian support team. Andy fulfilled his lifelong dream of working for LucasArts and in the Star Wars Universe he loved so much though he was an equally committed Star Trek fan.  After Star Wars Galaxies phased out as World of WarCraft (which he loved) took over the online video game landscape, Andy took paternity leave to be with his son during his babyhood. His next gig would be at Apple as a Creative for nearly ten years. At the time Andy was diagnosed with Vasculitis, he was slowing building a woodworking business, Star Bear Wood Productions, where he collaborated with a renowned needlepoint artist to create one of a kind items for crafters as well as furniture. Andy loved form and function.

However, none of his work or art meant as much to Andy as his family. Andy was a rare man who was able to reconcile that what he really valued was not achievement and outside reward as society told him he should  but a life of everyday joys with his wife, son, friends, and pets. He was a devoted partner to his wife. They beamed with  love and respect for each other and one illuminated the other. Cali and Andy were helpmates, lovers, and best friends from the time they met at just 19 years old and were more in love 27 years later than ever. They married in 1996 at the Riverside Art Museum.

Andy had always been a bit cynical but after the birth of his son, Franklin, and loss of two babies before they could be born, he opened his heart to be fully vulnerable and look toward actively  making positive change in the world. He was utterly kind. Andy dedicated himself to being a father to his boy who he cherished, admired, and adored. I love yous rang out easily and often between father and son. Hugging was a way of life.  The only good thing the disease gave Andy was the time to be home to greet Franklin each day and see him off to school and know his son and let his son know him in ways that too often allude parents and their children. They shared an amazing sense of humor, imagination,  and zeal for life, video games, and animals.

Andy died the best version of himself, completely himself and at ease with himself. His only sorrow was in wanting more time to do what he loved, be with those he loved, and do more to soothe the suffering of others. Even in his illness, with his multitude of talents,  Andy mentored young people in his online Twitch Community and supported Twitch Streamers working to make positive change and add joy to the world which can seem so bleak. His last act was the donation of his body to help find a cure for autoimmune diseases.

Andy is survived by his wife, Cali Linfor, his son, Franklin Peck, his mother, Sara Peck, his cousins Mary Ruppert and Ben Kinnick, his dog Alex, his cats Chloe, Luna, and Mr. Crackers, his turtles Pumpkin and Arthur and so many other dear ones.

A Day of Remembrance is being held in Riverside, California’s Olivewood Memorial Park on February 21st at 11:30 am.  A Celebration of Life will take place in San Diego California on the evening of April 11th at 6 pm in the Mission Trails Regional Park Visitors Center. All are welcome.

In lieu of flowers, donations can be made to one of the following:

Share Your Memory of
Andrew
Upload Your Memory View All Memories
Be the first to upload a memory!
Share A Memory
Plant a Tree