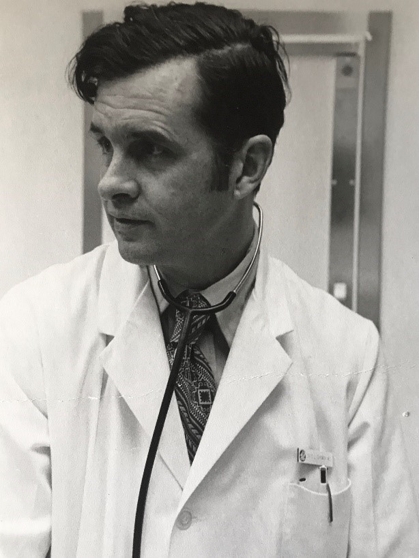 Dr. David L. Chadwick, pediatrician and internationally recognized expert in the identification, prevention, and treatment of child abuse and neglect, died at his home in La Mesa, California on January 19, 2020.

Although he nominally retired in 1997, he remained active in the child abuse prevention community, working part time for several years as a research professor of pediatrics at the University of Utah's department of pediatrics and at the Primary Children’s Center for Safe and Healthy Families in Salt Lake City, and serving as chair of the American Medical Association’s National Advisory Council on Family Violence. He also wrote a book (The Child Abuse Doctors, STM Learning, 2011) and many articles, nurtured his family, and pursued his passion for the outdoors.

Dr. Chadwick became interested in the study and prevention of child abuse early in his career, serving as an intern under Dr. Henry Kempe (a pioneer in identifying and treating child abuse) at the University of California San Francisco. He dedicated much of his professional career to addressing child abuse and neglect. He contributed to the original model Child Abuse Reporting Law, and was instrumental in its adoption in California. He authored or co-authored several books. He was the recipient of many honors for his professional work, including the C. Anderson Aldrich Award for "outstanding service to maltreated children” from the American Academy of Pediatrics, a Scientific Achievement Award from the American Medical Association for his pioneering work in child abuse treatment and prevention, a Lifetime Achievement Award from the American Professional Society on the Abuse of Children, and a Distinguished Scholar Award from the Academy on Violence and Abuse.

Dr. Chadwick was the last of three children of Joseph H. Chadwick and Margaret Lee Chadwick. Joseph served in the Navy until his retirement with the rank of commander. With Margaret, he founded the Chadwick School in Palos Verdes, California, which began with Margaret home-schooling her three children. With his older sister, Theodora, and his brother, Joseph, David was among the earliest graduates of the school, finishing high school in 1942, at the age of sixteen. He attended U.C. Berkeley, where he completed his course work in two years and applied for medical school. In January 1945, at the age of eighteen, he joined the Navy. He attended boot camp in San Diego, but upon completion, rather than being assigned to immediate service or specialty training he was ordered to attend medical school. World War II ended while he was attending. He graduated from medical school in 1949, and began his internship at San Francisco General Hospital. In 1950, at the outset of the Korean War, he joined the Air Force. After completing his internship and a summer course at Tulane University, he was assigned to an Air Force epidemiological group in Germany. He was discharged from the Air Force in 1954, and returned to San Francisco for his residency. After completing his residency and working for a time as a medical researcher, in 1958 he went to Los Angeles Children’s Hospital (associated with USC), where he became a staff pediatrician at the hospital and a junior faculty member at USC. He subsequently became Director of Clinical Services at the hospital. He left in 1968 to become Medical Director of San Diego Children’s Hospital (at that time known as the Children’s Health Center), which he helped build into the primary regional children’s hospital in San Diego County and a leader in the integration of medical services and expertise into social services and law enforcement related to child abuse and neglect.

Dr. Chadwick’s energies were not devoted exclusively to his professional interests. He was married twice, to Lois Bartholomew (in 1953), and to Michele West (in 1976.) He had four children from his first marriage (Joseph, Cathleen, James, and David (Bart) Chadwick) and two from his second (Ted and Kate Chadwick). He was very engaged in their lives, helping raise them as children and encouraging them as adults. His second marriage, to Michele, was his greatest source of personal happiness and satisfaction. He was a passionate outdoorsman, who backpacked, camped, hiked and fished throughout the western United States and Baja California, usually with his family. He travelled internationally. He read widely, including not just scientific works but non-fiction, fiction, and poetry. He had a prodigious recall, and could recite from memory favorite poems and long passages from literature. He played guitar and often accompanied himself as he sang songs. He loved music and theater, in particular musical comedy. But his most distinguishing personal characteristics were his commitment to making the world a better place, his inextinguishable belief that doing so was not just necessary but possible, and his refusal to indulge in self-pity. He retained these characteristics to his final days.

He is mourned but also celebrated by his family and many friends and colleagues. Private memorial services will be held. In lieu of flowers, his family requests that donations be made to Rady Foundation for the Chadwick Center for Children and Families (www.radyfoundation.org/donate/chadwick-center-for-children-and-families).

Share Your Memory of
David
Upload Your Memory View All Memories
Be the first to upload a memory!