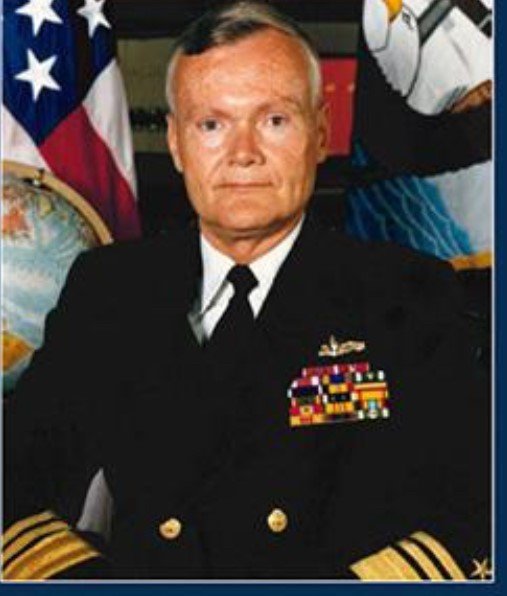 Coronado-Vice Admiral McCauley, USN (Ret.) 86, of Coronado, California died in Coronado, CA with Wife, Mary Ann McCauley and daughters Suzanne and Melinda at his side.  Born in Omaha, Nebraska, he was the son of late William P. McCauley and Annette (Teig) McCauley.  He graduated from Creighton Prep High school and earned a Bachelor of electrical engineering degree from the United States Naval Academy.  He subsequently earned masters and doctoral degrees in finance and economics and studied at the Royal Naval College in Greenwich, England.  He retired from the US Navy in 1988.

Admiral McCauley early sea service was spent aboard Destroyers in both the Pacific and Atlantic fleets and distinguished himself in combat in Vietnam commanding fifty river assault boats for which he was decorated with two Bronze Stars with combat V, Air Medal and the Purple Heart.  During his illustrious career, he commanded the USS Brooke, USS Halsey, Destroyer Group Eight, Commandant of Midshipmen at the US Naval Academy, Commander Naval Surface Forces Atlantic.  His shore assignments included Washington tours associated with the System Analysis and Programming of major Navy programs.  He returned to London and served on the CINCUSNAVEUR Staff and was the Executive Assistant to the Chief of Naval Personal.

Following retirement from the naval service, Admiral McCauley was a Fortune-500 corporate officer, Foundation director, and served on the Boards of numerous corporations, as well as on the Red Cross and Scripps Boards in San Diego. He authored three published novels.

Admiral McCauley was a sports enthusiast who loved to play basketball even his 60’s.  He was also an avid tennis player who always challenge his wife and children to many competitive games.  He was a member of the Army/Navy Country Club in VA and the New York Yacht Club.

Memorial services will be held at Sacred Heart Catholic church in Coronado on the Saturday, May 18th at 10:AM and at the US Naval Academy, Monday, June 10 at 2:PM.

In lieu of flowers, memorial donations may be made to:

To plant a tree in memory of William McCauley, please visit Tribute Store
Saturday
18
May

Share Your Memory of
William
Upload Your Memory View All Memories
Be the first to upload a memory!
Share A Memory
Plant a Tree