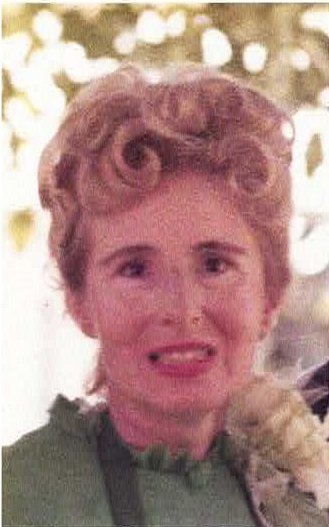 Verla Ruth (Meyer) Chance 96, passed away on January 28, 2019, in Rancho San Diego, CA.  She was born April 27, 1922, in rural Sumner, IA.  Verla was the daughter of Louis and Emma (Moehle) Meyer, life-long residents of Sumner, IA.  Their farm was located adjacent to the Spring Fountain Lutheran Church, just south of Rt. 93 on what is now Tahoe Avenue.

Verla was well known for her determination and spunk.  Following graduation from Sumner High School in 1938, she attended and graduated from the American Institute of Business (AIB) in Des Moines, IA.  She worked for Rath Packing Co. in Waterloo, IA, until 1942, when, with fellow AIB graduates, she moved to Beverly Hills, CA. She worked for a dermatologist whose patients included many of the movie stars of the 1940’s. She ended her professional career in Sacramento, California as the office manager in a medical office.

Verla met her husband, Major Chance, on New Years’ Eve, 1944, in Huntington Beach, CA, and they were married May 10, 1946, in Norfolk, VA. They lived briefly in Baltimore, MD, and Indianapolis, IN, then moved to the San Francisco Bay Area.  In 1960, the family moved to Sacramento, where they lived for 45 years, until relocating to San Diego to be closer to their son. Verla and Major enjoyed spending time together playing cards with friends and visiting new places.  They traveled abroad, took cruises and vacationed with their friends.  She particularly enjoyed Hawaii and Lake Tahoe.

Verla is survived by her two children, Steven and Carol, and three grandchildren, Jason, Jennifer, and Emily . She is also survived her by her cousin and childhood friend, Lorena (Kueker) Westendorf, originally from Sumner, IA.

A private, family burial will be at Miramar National Cemetery, San Diego, CA., with her husband, who predeceased her in death. Funeral arrangements are being handled by Legacy Funeral and Cremation Care in La Mesa CA.  Online condolences may be made at www.LegacyFuneralCare.com.  In lieu of flowers, the family requests donations in Verla’s memory be made to your favorite charity.

To send flowers to the family or plant a tree in memory of Verla Chance, please visit Tribute Store

Share Your Memory of
Verla
Upload Your Memory View All Memories
Be the first to upload a memory!
Share A Memory
Send Flowers