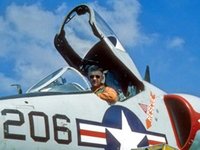 In Loving Memory of

It is with a heavy heart that we announce that on December 12, 2020, John Frank Faron made his final flight.  John was born on August 27, 1933, in Chicago, Illinois, to John T. Faron and Mary Rose (Szczecina) Faron. He graduated from Mt. Caramel High School in Chicago, IL.  He attended Ohio State University before becoming a Naval Cadet in 1953.  John met his wife, Martha, in Quonset Point, RI.  They married in Rhode Island in 1957 and recently celebrated their 63rd wedding anniversary.

John had a meritorious 26 ½ year career in the Navy.  He spent the majority of his career as an A4 Skyhawk attack pilot.  Serving four tours in Vietnam, John had almost  1,000 carrier landings with more than half of those at night.  His passion for flight never waned.  After Vietnam, John spent time at the Naval Post Graduate School in Monterey, CA., the Armed Forces Staff College in Norfolk, VA., and the Pentagon in Washington, DC.  John retired from the Navy in August of 1978 at China Lake, CA.  John’s service to our country, and his continued love of aviation, are commemorated on the National Air and Space Museum’s Wall of Honor

After retiring from the Navy and still living China Lake, CA., John worked for a variety of private contractors supporting new business in the Naval arena.   In 1999, John and Martha, moved to Oceanside, CA.  John began volunteering as a docent at the San Diego Air and Space Museum sharing his love of flight, and many stories, with visitors of all ages.  In May 2000, he received the ultimate gift, a heart transplant that gave him 20 more years of an active life.

John’s other passion in life was playing golf.  He played at every opportunity.  He even went so far as to take his very young children out to the golf course to sit in the cart as he played.  It was his way of “babysitting”.

In 2016, John and Martha, moved to Paradise Village in National City, CA.  John continued to enjoy golf, continued his involvement with Air and Space Museum, and joined the Astronomy Club.  Martha continues to be involved in many clubs and activities there.

Private burial services will be held at Miramar National Cemetery at a later date.  In lieu of flowers, please consider a donation to the

John was privately interred at Miramar National Cemetery in San Diego, CA on January 8th, 2021. A family service will be held at a later date.