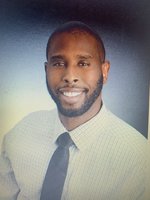 Andrew attended private and public schools while growing-up and living in the Greater Houston, Texas area.  He participated in several extracurricular activities and programs, but his favorites being computers and sports. After which , he served his country in the United States of America Navy. While station and residing in San Diego, California, he further his post secondary education in the fields of Computer Programming & Coding, Business Entrepreneur, and Réal Estate.  A passion he had was talking to people so as an UBER driver he met and helped countless people.

His carefree and unwavering life will forever be cherished and honored by so many.  He was a son (Herald Jr and Elaine), Husband (Jennifer Geels Washington), father (Jay),  Older Brother (Herald III and Joshua), Grandson (Lessie &  (late)Willie Johnson) and Peggye & Herald Gordon (both deceased), and  Son-in-Law (Kia and Lyle Geels).

The family would like to express their gratitude to the city of Greater San Diego, California;  the Legacy Funeral &  Cremation Care; all the family, relatives, friends, co-workers and acquaintances from near and afar who sent comforting words, prayers, flowers, and so many kind gestures of support. We truly are humbled, grateful, and thankful to all of you. May God’s Blessings be upon you forever!

Andrew will be greatly missed and will forever live in our hearts as we keep his legacy alive.